Recently, the network has been an increase in reports of Toyota models oil issues, mainly related to the models as the Camry and Avalon 2.5L dual-engine version, there are a small part of the fuel version of the model, there have been similar problems. Later, Lexus owners also found an increase in oil phenomenon, which is what many users let the surprise. Because in the minds of consumers, Toyota has been synonymous with quality and stability, global sales of the first engine company how could even have made it bad? Moreover, the increase in oil issues on the uproar last year, Honda, Toyota's next-door neighbor should not repeat this a stupid mistake, right? 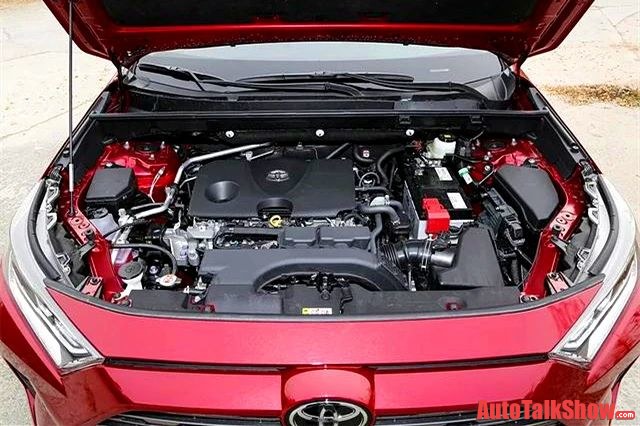 In fact, even I started to also believe that this thing is not any misunderstanding?

It's like Andy Lau concert, because pharyngitis issues need to terminate the show, Andy apologize to the fans, we all understand him. But a bad reputation into other star, for the same reason, the same operation, certainly condemning the.

So cars and star, who set up is very important. But empathy, oil increased in many people's mind is the block heart disease. After all engine maintenance cost in the hundreds of thousands, not ordinary people can easily accept. And oil is a chronic disease increases, it has been found that will certainly be rights, but also rights not found. So, usually just open regardless of the repair of Toyota owners, now go downstairs every day, first thing is to open the hood and pull out the dipstick. If a Volkswagen parked next door, I believe two owners will laugh.

Toyota owners all over China, when he found a lump of white stuff when fuel inlet cover, normal operation is to shoot video and upload pictures forum, or the vibrato release. Now let's grassroots activists channels more widely, the major platform individual can register an account, and sometimes, believe it a prime people in a small video on hundreds of thousands of the thumbs.

Toyota oil and increase it, occurred at a time very unfortunately, happened to be in early March, this month will have a field event of the year all the people concerned, that is 3.15 CCTV party. However, this year to disappoint you, because of the impact of the epidemic, 3.15 show postponed indefinitely. It can be said Toyota escaped unharmed. But recently it is still fermenting, whether owners or prospective owners, we all want to understand this in the end is how it was.

Not long ago, out of the network of internal e-mail a few manufacturers, one for a home north of Toyota dealers to upload and the other is our Nanjing upload some dealers, this Toyota senior leadership to make things very annoyed.

In fact, this message and nothing special content, just explain the increase in oil and emulsified phenomenon in the form of QA. Manufacturers want nothing more than what the dealer uniform interpretation, then surgery. However, everyone on the network Kuangpen Toyota, that manufacturers shirking its responsibilities. Since the beginning of the e-mail says "basic policy": this time the engine oil level exceeds the caliper F tick marks, and the phenomenon of emulsified oil inside of the cover, it does not involve the quality problems.

Then the mail explained that if customers ask why is there an increase in oil and emulsified phenomenon, should answer:

1, F engine plant to tick whichever is injected into the oil, but there are a certain tolerance, the oil may exceed the actual caliper lines F oil injection, but still within a predetermined range.

2, change the oil when the vehicle maintenance is also possible to exceed the oil level F-line.

3, according to the principle of the engine, at the time of cold starting, very small amounts of unburned fuel through the gap between the piston ring and the cylinder into the oil, which is normal.

4, the height measurement of the oil level, if the ground level, oil temperature also affects the liquid level (the engine temperature is high, thermal expansion resulting in an increase volume of oil)

If the customer Q emulsified reason, should be answered:

low short-distance travel, work intermittently hybrid engine models, not fully stopped before the warm-up time, the dew condensation inside the oil filler cap water can not be completely evaporated, the emergence of local white emulsification. By the continuous operation of the engine, the engine oil temperature rises, this phenomenon will disappear, which is normal (gasoline engine running at low speed a short distance, this phenomenon is not fully warmed under a state will occur).

In addition, Toyota believes the increase in oil normal range of values ??is how much?

The official explanation, measured according to the standard method of measuring oil level, such as pages over the F-line 25mm, please contact your nearest dealer, check into the store.

However, after consumers buy this explanation yet?

Apparently not, at present on a network or a large number of users rights complaints.

So in the end how it was emulsified oil

What's the matter with oil emulsification?

This is actually the oil and water two immiscible liquids are mixed together, as it happens around and provide favorable conditions for emulsification, will be such a phenomenon.

Next step is to look for the engine in the water come from?

Simply speaking, is Toyota's engine is a direct injection technique, and is a two injection. We can imagine, then sprayed gasoline into the cylinder, under normal circumstances should be fully combustion, exhaust gas discharged to finish the job. However, at low temperatures, if not hot car, the driver and the long-term short, far from the engine operating temperature, the fuel injected into the cylinders, the combustion part, part of it hanging on the cylinder wall, to form a "wall wetting phenomenon . " With the piston ring to the oil pan into the oil scraping effect, over time, its oil and mixed together, emulsification is formed. 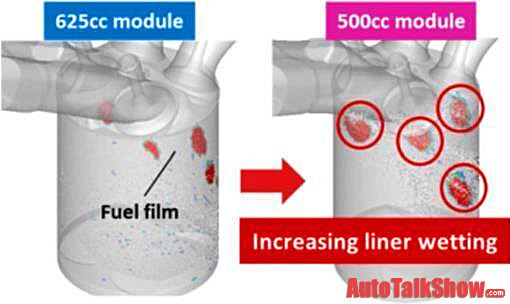 In another case, only the fueling port is covered emulsification occurred, but dipstick pull out, and found no emulsification. This happens because after the engine is stopped, the PCV valve is closed, a positive crankcase ventilation system to stop the cycle, the water temperature in the engine rises to the top of the chamber under the effect of high temperature (100 deg.] C) of. This time, he met the cold air to internal and external valve chamber cover, condenses into drops of water, mixed with creamy yellow-white hydrocarbon mixture, which is that we see a lump of white stuff. 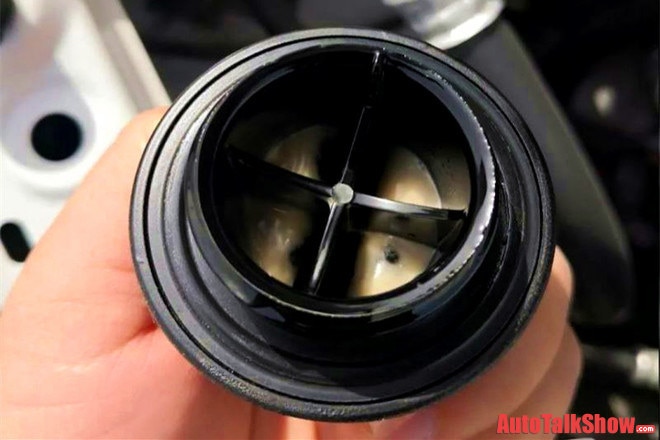 This emulsification fueling flap position, many the owner will encounter. Under normal circumstances, the vehicle open for long or frequent short trips, outdoor temperature is too low and the environment, will appear. However, as long as the owners of long-distance run several times, this phenomenon will disappear naturally. Therefore, this can not be regarded oil emulsion due to product quality problems caused.

However, if you pull out the dipstick and found that an increase in oil or the oil has been completely emulsified, and usually drive significantly higher fuel consumption feeling, accelerate hard and so on. It shows that this car has lost oil lubrication, the owner in the case of normal use, the vehicle this problem, you have to say is not a quality problem, it really justified.

In fact, there is an internal Toyota engine oil dilution evaluation system in the factory before the vehicle will start at -35 cold environment, then wait until the water temperature to 50 , turn off the engine. Then cooled to -35 , then cold start. So repeatedly tested. To see whether the increase in oil at a reasonable level. In theory, the world-famous Toyota lean production, fishes problem should not occur in this area.

So, oil emulsion problems Toyota, the current number is only emulsified fuel inlet cover position, and how much is completely emulsified oil, is not clear. Many people may ask, do not open another car during the epidemic, why only Toyota problematic? Now only get multiple samples for analysis in order to have results, currently speculated that Toyota is likely to be in order to reduce friction, piston rings and cylinder wall clearance is too large. It may be in pursuit of fuel economy, reduced idling heat load, thus leading to the oil temperature does not rise up. Hybrid vehicles in particular, would have less engine operating conditions, the oil rises more slowly, no atomized fuel flows more easily along the cylinder wall oil pan.

So, the owner said the oil emulsion, the emulsion manufacturers say no, this in the end how to define it?

2011 China in October promulgated the "People's Republic of China national standards - Gasoline Engine oil change indicator", which has a detailed explanation: the engine work during fuel combustion and inhalation of water vapor generated by the breathing hole water vapor, will bring into the engine oil contamination. Oil in water emulsion leads to deterioration of the oil, and cause corrosion of engine parts surface corrosion. Since the working oil in the engine is always at a higher temperature (80 ), the water content of the oil are normally lower. For values ??of engine oil, water content, "GB/T 8028-2010" file given 0.2?

As the owner, how to avoid the phenomenon of emulsified oil

How to avoid oil emulsification?

First, of course, is to choose the type of oil for their vehicles. Followed before the winter driving, idling about one minute after launch and then driving, try not pulled just started speed, turn the control within 3000. The final step is often that running a small long-distance, so that the engine temperature increases, can eliminate the retained water vapor from the engine.

So, which also confirms the old saying: put the cars are bad, not bad open.

summary terms, Toyota recently appeared in oil emulsification. Recently recommended to prepare the car, or while watching a detour better. At least we have to wait for a formal official affirmed that explain the car and then shot. And the second half of this year the market should be larger discount rate, which is the reason we just have to wait in.

and before the other hand, Honda oil door event, post-processing scheme is to replace the air conditioner control unit and changes the heat pipe assembly line; and the three branches of a heat pipe is blocked, so that heat more vehicles fast; and then upgrade the ECU to adjust the fuel injection quantity, but also in order to quickly heat the car. 4s shop owners returned to the recall process takes about one and a half to two hours. Toyota If this does not give solutions, it is destined to have a negative impact on the brand. But the process of thinking, in fact, will be much the same with the Honda engine to solve the problem is nothing more than the heating rate. But after the heating rate increase, fuel consumption will inevitably be affected. However, recent oil price dropped to 5 yuan era, increased oil and increased oil consumption in the face of two things, which would you choose it?

If Toyota owners can be opened during the day before the oil filler cap to see if there is not the problem. Surrounded by open Toyota friends, you can also remind them to check.