In the past week, the general public in China are selling well in the new Passat shaking CIRI Auto Technology Institute is a circle hit the car is definitely the hottest news, not only severely hit public face, incidentally, also playing That convinced a bunch of public security owners face.

CIRI Auto Technology Institute of the C-IASI crash test is divided into four categories, namely, crashworthiness and service economy, an occupant safety, vehicle safety and vehicle auxiliary layman security. The first three are generally low with only hit, after all, is the most low with the amount of walking, but also the weakest; the last one only for the top with, involving active safety, coupled with almost no low. Accomplishments, G = go to work tomorrow, A = minor injuries themselves, M = hospitalization, P = village for dinner. Just look at four categories, the new Passat's performance is passable, two "G".

But if you open the "interior member of the Security Index" column, will be in the "front 25?ffset crash" found a red "P".

offset collision and then to the specific details, it becomes a million flowers a little green, like a bull, like whole line.

Back airbag unwanted offset collision in which the video portion, in the moment of impact, the vehicle top severely deformed, the left front wheel from entering the cockpit wide, A pillar bent 90 degrees and almost broken, transverse displacement of the steering wheel with the airbag and copilot straight away. The most frightening part is that, the last line of defense of the air bag, in fact, did not play the role of a trace, it has led to the dummy's head hit the steering wheel and air conditioning vents, direct headshot, whole pieces without the slightest dummy head airbags printed the painting. In addition, 25?ffset frontal crash tests per hour than some people think of 120 km / h, but about 64 km / h, which is slightly higher than the speed limit downtown main road. The new Passat exactly how the results at the same level?

For one thing, the new Passat hit the worst record CIRI Auto Technology Institute 25?ffset frontal crash test, negative 44 score Kuangshuai other models, even the form of the horizontal axis are abruptly pulled it long length.

As for other forms of reciprocal models, most of them are low-cost domestic SUV or inherently less secure MPV, and the negative scores are between 22-24, 44 short of the new Passat very far. 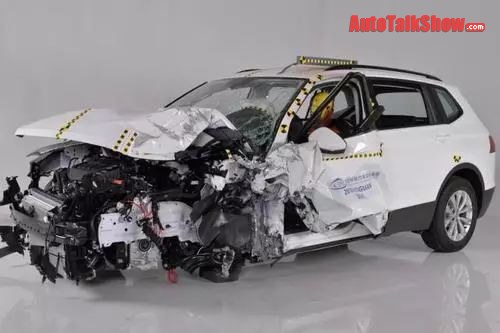 Tiguan L combat that point the way, this form revolutionized the perception of many people for German and Japanese cars safety. On the one hand, the Japanese midsize three heroes of Teana, Camry, Accord play are good, not imaginary BMW 3 Series and Mercedes-Benz A-class, especially the Teana and Camry, plus a new listing of the Asian dragon. On the other hand, Volkswagen Group models turned out to be the best performing Skoda Cody Senanayake, there's only natural Magotan OK, the highest-selling L Tiguan and Passat but miserable. So-called "Japanese crisp as paper, unsafe; Ashkenazi thick steel plate, thief security", now placed as a joke to listen to it.

Why the new Passat's performance so bad?

This is actually a very serious issue, and at present does not give a definite answer. Until now, some people still rely on closed distinguish safe, sound boring is safe, crisp is unsafe, the public had to say, including many German cars in this area is really the color. But this is an extremely paranoid thoughts, I will not speak of this sound just a few strips will be able to create out, even up to millions of luxury cars, nor is there every heavy door slamming. Even if it is good enough because the door materials have a heavy door slamming, it can only be said to be helpful against side impact, side impact, but not the security of all. 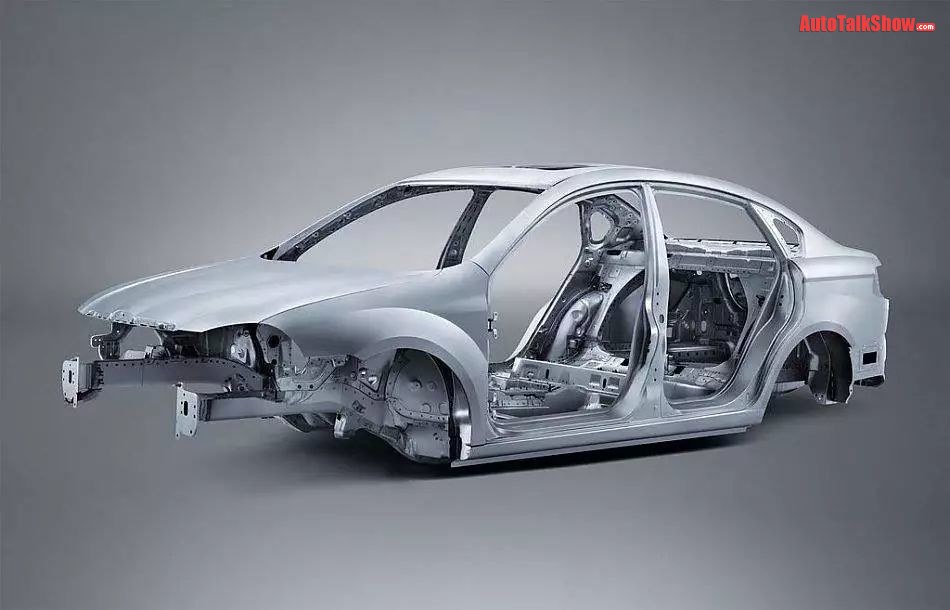 For the new Passat, I will not believe that the technical strength of the public, will be on several previous problems, it is only the consumer psychology and the national regulatory requirements.

The national regulatory requirements, can only say that we are surely some shortcomings, but I think it is just on the one hand; on the other hand, the lack of comprehensive, rigorous crash tests before the domestic CIRI Auto Technology Institute . While the previous C-NCAP is also doing well, but has been dubbed the "Five Star Wholesale Division," and after CIRI Auto Technology Institute came out, a lot of the C-NCAP five-star safety car even annual direct chops underwear, such as Magotan. 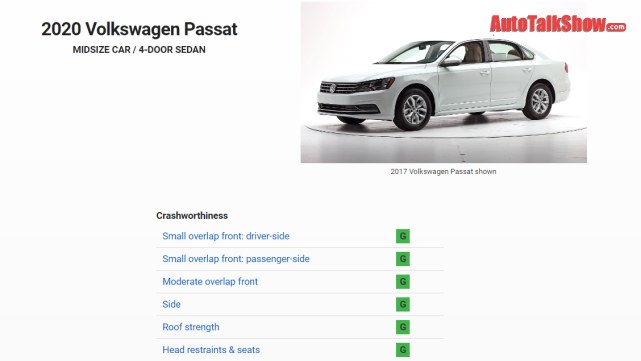 US version of the Passat 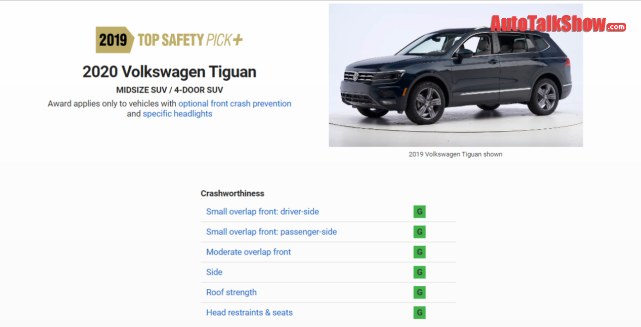 US version of the Tiguan there is a Sino-US comparison, the similar test content CIRI Auto Technology Institute the Insurance Institute for Highway safety IIHS crash tests, PQ46 platform still use the US version of the 2020 Passat, the crash results are "G", while the standard wheelbase models 2019 Tiguan, while a full "G" also won the " + highest safety award. " The crash test, the front contains the 25?ffset crash. In China, MQB platform leading the US version of the Passat half a generation to generation, the wheelbase Tiguan Tiguan transformed into L, reasonable in the circumstances should not be lost on the US version, but just how well the two brothers hit form in It has also been seen. 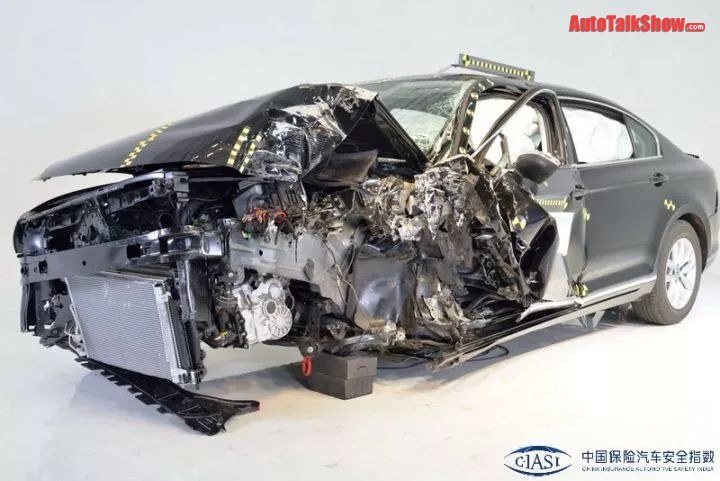 magotan (A curved column) There is also a partial contrast "residue" of rear collision, the first to apply for a certain know almost big God reviews for Magotan, I am personally inclined to agree: "the event of a collision, the front side frame almost no force, all strikes are concentrated in the front cover this is the most flexible of the upper plate structure, that little low carbon sheet steel, is pressed toward the front pillar with the torn front pillar hub structure is pressed, to fail, and damaged column a, column a bending deformation, and pulling stringers upturned ...... such a design, no problem, 25?f the previous generation Passat United States IIHS offset crash also basically this idea, but the difference is that the a-pillar front pillar and steel meet the design parameters ! structure as long as the front pillar remains substantially intact, a pillar at the side sill pull, plastic deformation is not easy. of course, with only good steel, can be withstood a heavy impact, but ...... " 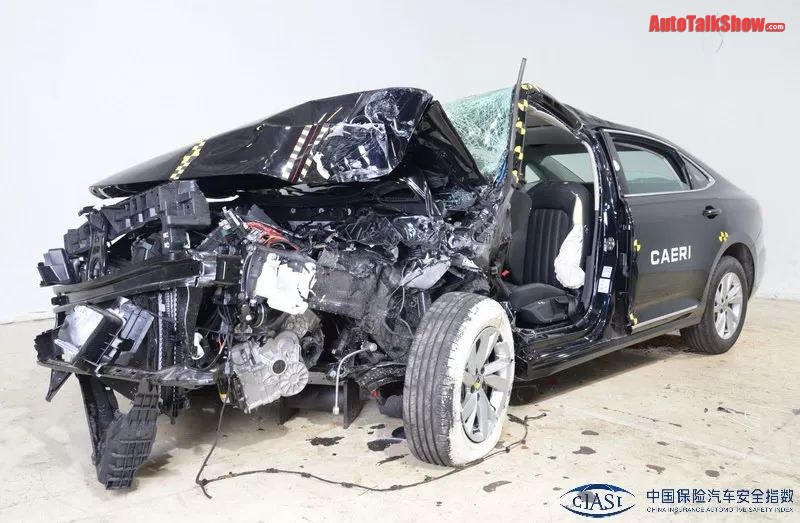 Passat (A column break) Passat are all new and magotan MQB platform, there is not much difference between the mechanical structure, more or design and materials different on. So Comments can also be applied in the new Passat, the new Passat is just the result of a collision more "surprise", A column directly to the dry break.

After much deliberation, except possibly because "take full advantage of consumer psychology, under the premise of compliance with national regulatory requirements, cost savings, as much as possible," I can not think of a second can be explained by the new Passat performance reasons, but most likely with the acquiescence of the German public. Create in this concept car had not meet the original design requirements, what laser welding, cavity wax injection, thermoforming process, even ultra high strength steel of high strength nature is no good.

offset collision in the end whether the necessary? 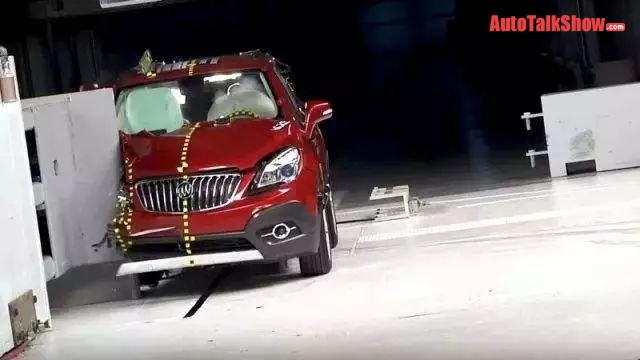 The answer is yes, it is necessary. According to the Insurance Institute for Highway Safety statistics, about a quarter of the nation's annual fatal head-on collision accident was due to a collision resulting in a small area, so from the beginning of August 2012 added 25?ffset frontal crash test in IIHS crash tests. In other words, although the strict test to make the vast majority of manufacturers hate it, but the original intention was not to tease the manufacturers, but for a more realistic simulation of an actual collision. 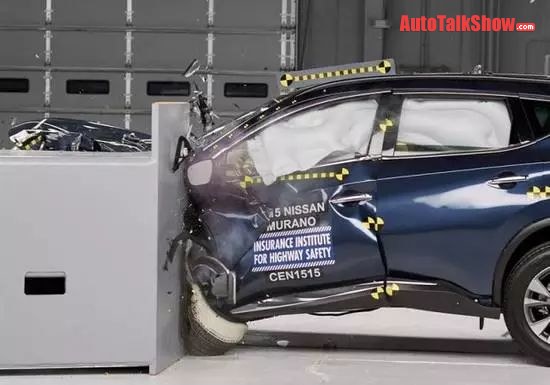 However, the test is not a panacea. 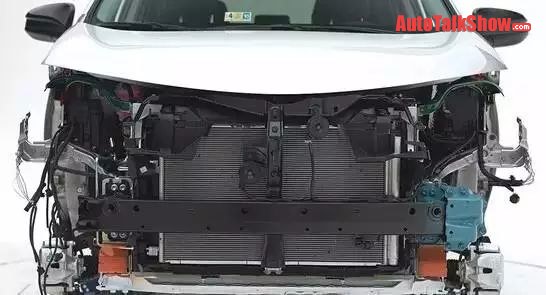 RAV4 main drive "G" secret ( green part) by the body structure to deal with some type of tool can pass the test, such as the Toyota RAV4 have been strengthened for the structure of the main driving side, too smooth "G". The results IIHS decided not to follow the routine the cards, joined the co-pilot side of the offset collision, the collision immediately emerged in the prototype. From a pessimistic point of view, frontal offset crash test is 25?n the United States will surely question the sale of all models, this looks like the college entrance examination leaked ahead of a big issue as before the exam you will figure out the perfect answer. But this does not mean that the whole exam you will be able to get a high score, real collisions often are those you do not know the title, will always appear in unexpected ways, is learning when to learn Pa slag or a glance to. But an optimistic point of view, this may sound a bit like the exam-oriented education, but think of ways to changing patterns of crash testing has become increasingly practical, real. Each place hit over and over, like a yearly exam brush again, and slowly will learn from the slag into a school bully.

The answer is no, does not it is not necessary. Insurance Institute for Highway Safety, not a government agency, but a non-profit organization. IIHS crash tests every year so many smash car is completely paid for by major insurance companies behind the insurance company aim is simply to optimize the corresponding premiums according to the results of each collision models, the bulk of this is to make money.

Finally, I want to say is ...... new Passat is such a hit, knocked two very good thing to:

First, forcing people to face brand deficiencies. A group of old qualifications brand, reputation in the country, should play an active role. But perhaps in order to make profit maximization, they gradually car from research, research into consumer psychology and national regulatory requirements, take the initiative to bring rhythm to the opposite direction, at the same time frightening is driven by a lot of people formed a kind of blind election concept car . This one, some people will find that these car brands did not think is so good.

Second, while giving many brands reminder. Cost play more than once traced out a bad crash results more than once made public, but unfortunately the last good pain is forgotten. However, it is foreseeable that, CIRI Auto Technology InstituteC-IASI crash tests will continue to influence will be growing, China as the first global automotive market, fully worthy of the safest cars. This one, though hurt and brand owners, but this is a healthy development must go through the throes of a national auto industry. Of course I do not want to see, but it can also happen that the new Passat in the history of the biggest concessions, 4S shop a berserk scene ......